-- Robert Cardillo, NGA Director
The Director's Intent, 10/3/14
Products and/or services described may only be available to authorized customers.

The NGA Office of Geomatics defines, converts, and portrays coordinate systems for the National System of GEOINT and its mission partners.

GridA grid, or more specifically a Grid Reference System, is a means by which to reference locations on the Earth's surface using a two dimensional Cartesian coordinate system referenced to a map projection. A grid coordinate defining a location consists of and is written as an ordered pair of x and y values expressed in linear units. Standard grid reference systems used by NGA and DoD are the Universal Transverse Mercator (UTM) and the Military Grid Reference System (MGRS). Both of these grid reference systems use the meter as the unit of measure and define an easting (x) and northing (y) referenced to a series of transverse Mercator map projections with specific projection parameters.

Graticule A graticule, or more specifically a Geographic Reference System, is a means by which to reference locations on the Earth using a system of angles. A geographic coordinate defining a location is usually expressed in angular units of latitude and longitude. Latitude (φ - phi) is the angle between the equatorial plane and the straight line that passes through the point in question and the center of the reference shape (WGS84 ellipsoid). Longitude (Λ - lambda) is the angle east or west of the reference meridian (Greenwich Prime Meridian) to another meridian that passes through the point in question. The standard geographic reference system used by NGA and DoD are latitude and longitude expressed in sexagesimal (base 60) numbering system.

GARS is the standardized battlespace area reference system. It is based on lines of longitude (LONG) and latitude (LAT), and is used to provide an integrated common frame of reference for joint force situational awareness to facilitate air-to-ground coordination, deconfliction, integration, and synchronization. This area reference system provides a common language between components and simplifies communications. It is important to note that GARS is primarily designed as a battlespace management tool and not to be used for navigation or targeting. 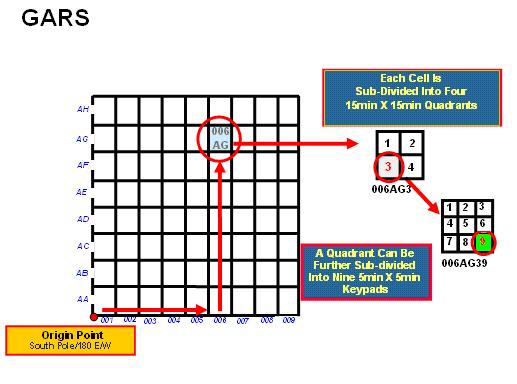 MGRS is an alpha-numeric system for expressing UTM/UPS coordinates. A single alpha-numeric value references a position that is unique for the entire earth. Using "15SWC8081751205" as an example, the components of MGRS values are as follows:

The first two characters represent the 6° wide UTM zone: The third character is a letter designating a band of latitude: 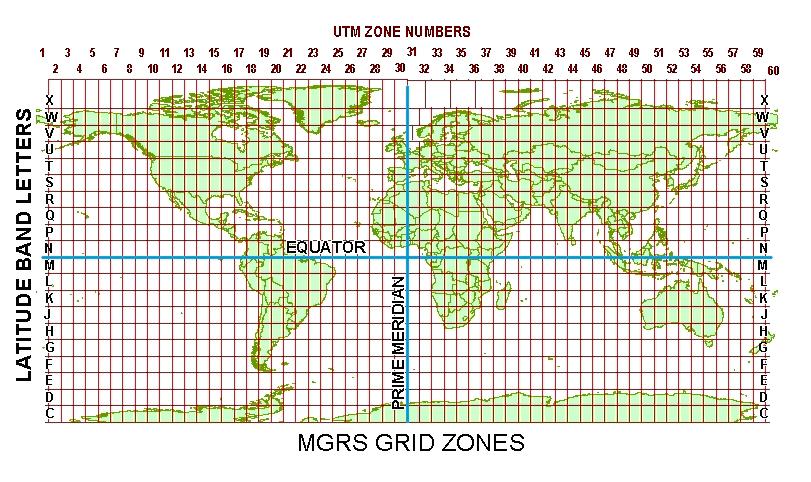 The fourth and fifth characters are a pair of letters identifying one of the 100,000-meter grid squares within the grid zone (or UPS area). See figure to the right.

Warning! For MGRS, the letter after the UTM zone designates a latitude band. UTM has two widely used coordinate formats; one incorporates the MGRS latitude band letters, the other uses "N" and "S" to denote hemisphere. Caution must be used to not confuse the letter "S" band letter for a hemisphere designation and vice versa. 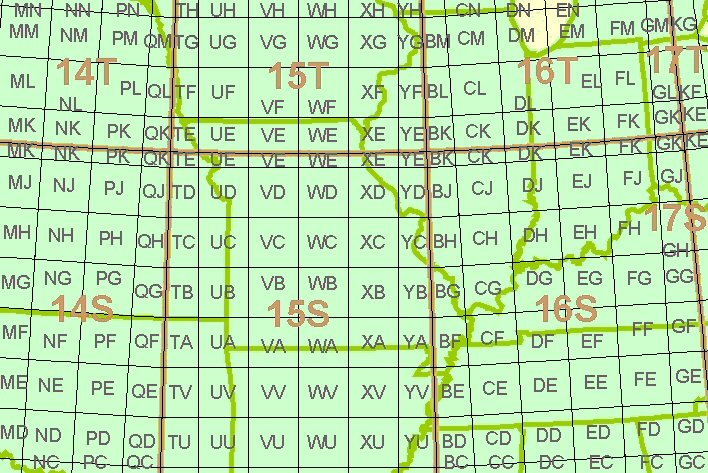 The remaining characters within the MGRS coordinate correspond to the UTM values starting with the numbers in the ten-thousands place in the Easting and Northing, and including more numbers depending on desired precision level. See figure to right. MGRS coordinates may be rounded to reflect lesser refinement. For example:

There are two lettering schemes for the 100,000-meter grid square identifiers. Generally, one scheme is used for WGS-84, and the other is used for older ellipsoids associated with the local datums:

The magenta arrows show how MGRS Easting and Northing values are determined from within the 100,000-meter grid square. The MGRS value of this position is 15SWC8081751205. See figure to the right. 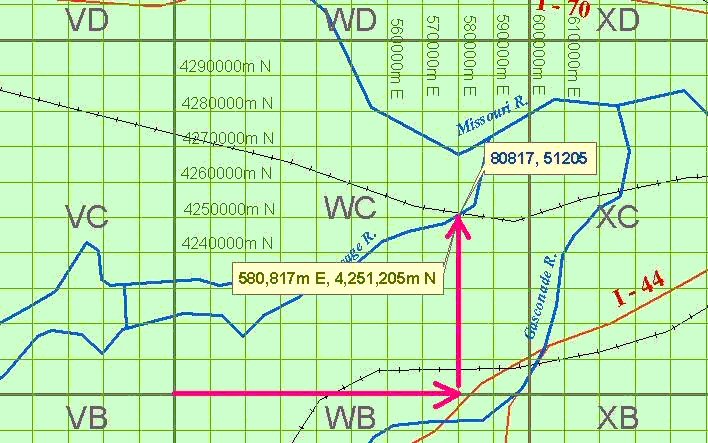 UTM coordinates are based on a family of 120 Transverse Mercator map projections (two for each UTM zone, with one for each N/S hemisphere).

Numbering of zones begins at 180° and proceeds eastward:

Each zone also has a central meridian:

UTM is limited to the area between 84°N and 80°S. Beyond that, Universal Polar Stereographic (UPS) coordinates are used. See section on UPS. 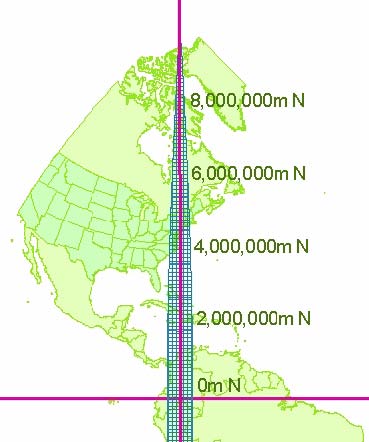 Warning! In many systems, the letter after the zone number designates a latitudinal band, not a hemisphere. 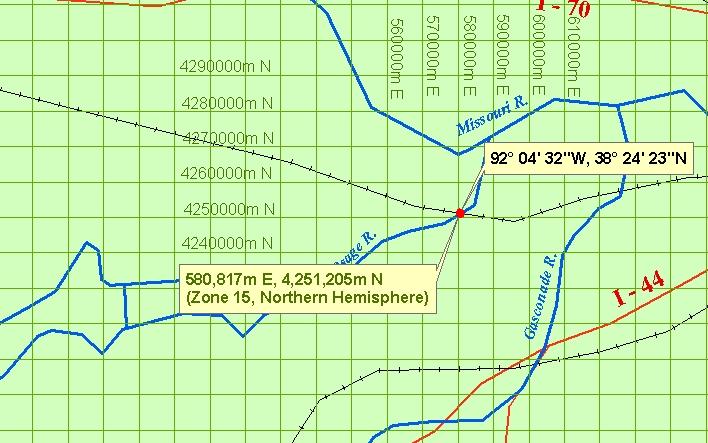 
Warning! In many systems, the letter after the zone number designates a latitudinal band, not a hemisphere. 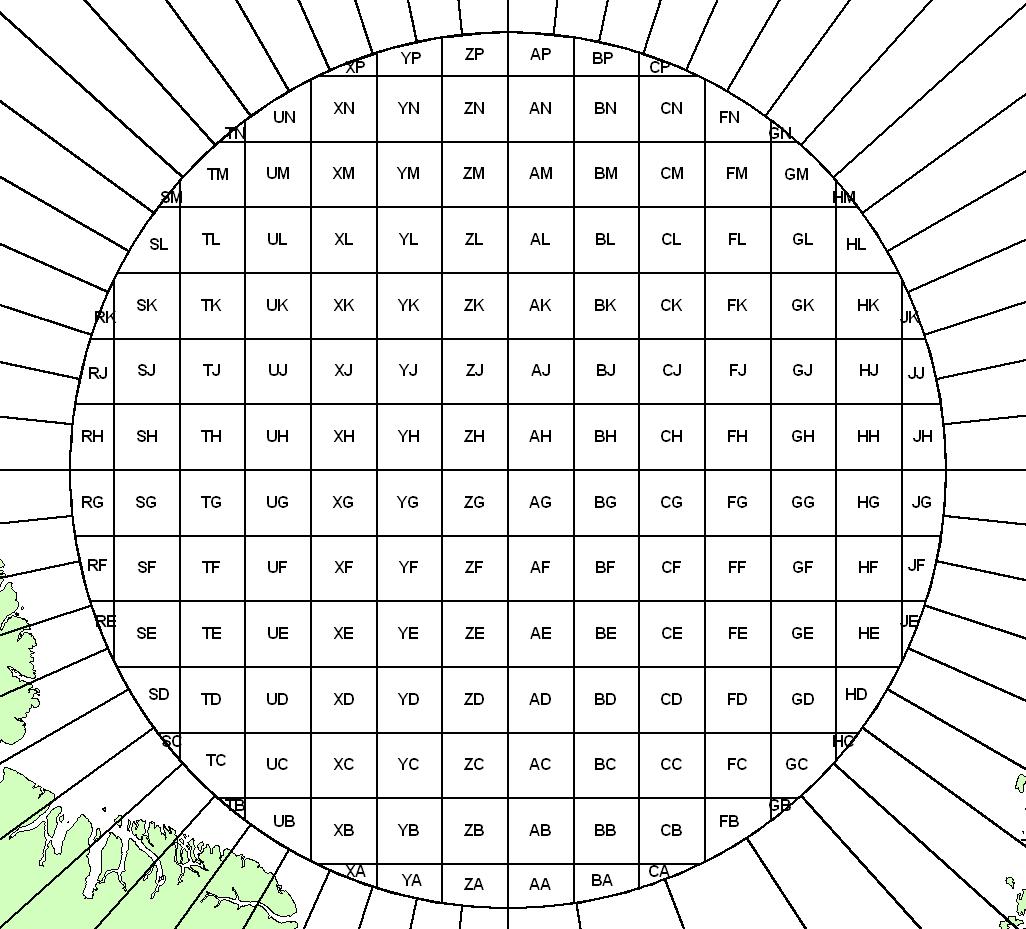 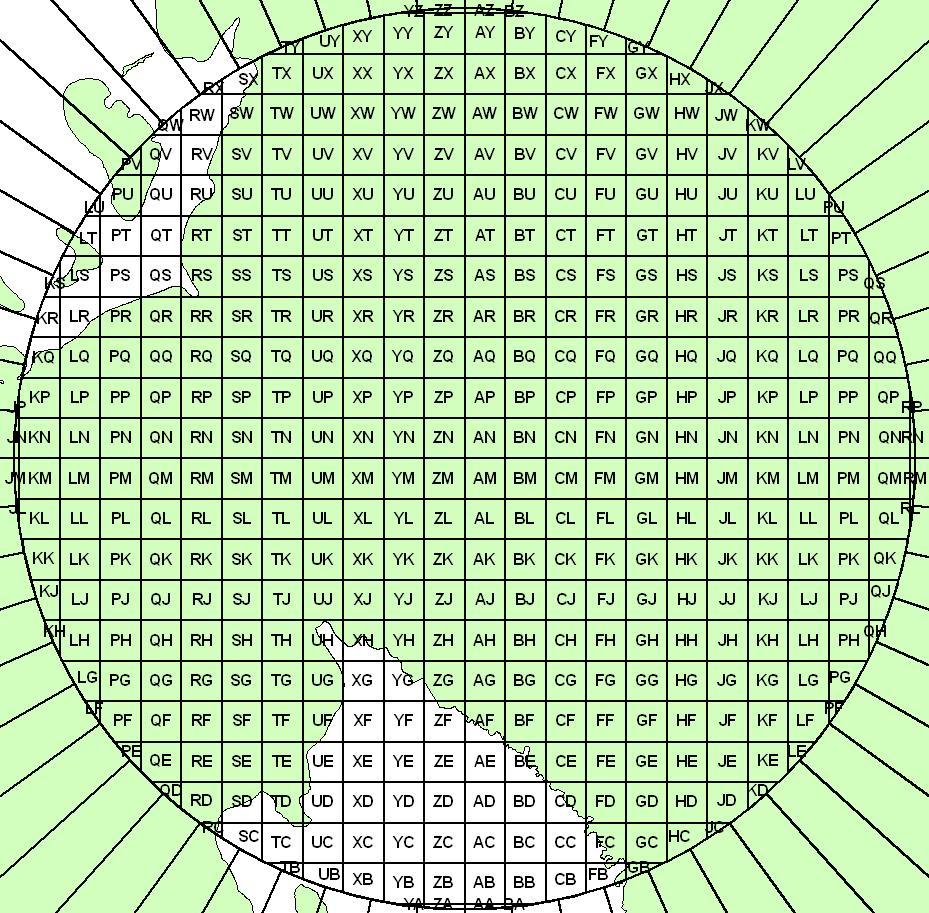 Following the sexagesimal, base 60, system, degrees can be subdivided into 60 minutes, and minutes can be subdivided into 60 seconds, for the purpose of increased precision level. This can result in several formats, such as degrees-minutes-seconds, degrees-decimal minutes, and decimal degrees. The more digits included in the coordinate string, the higher the precision level. 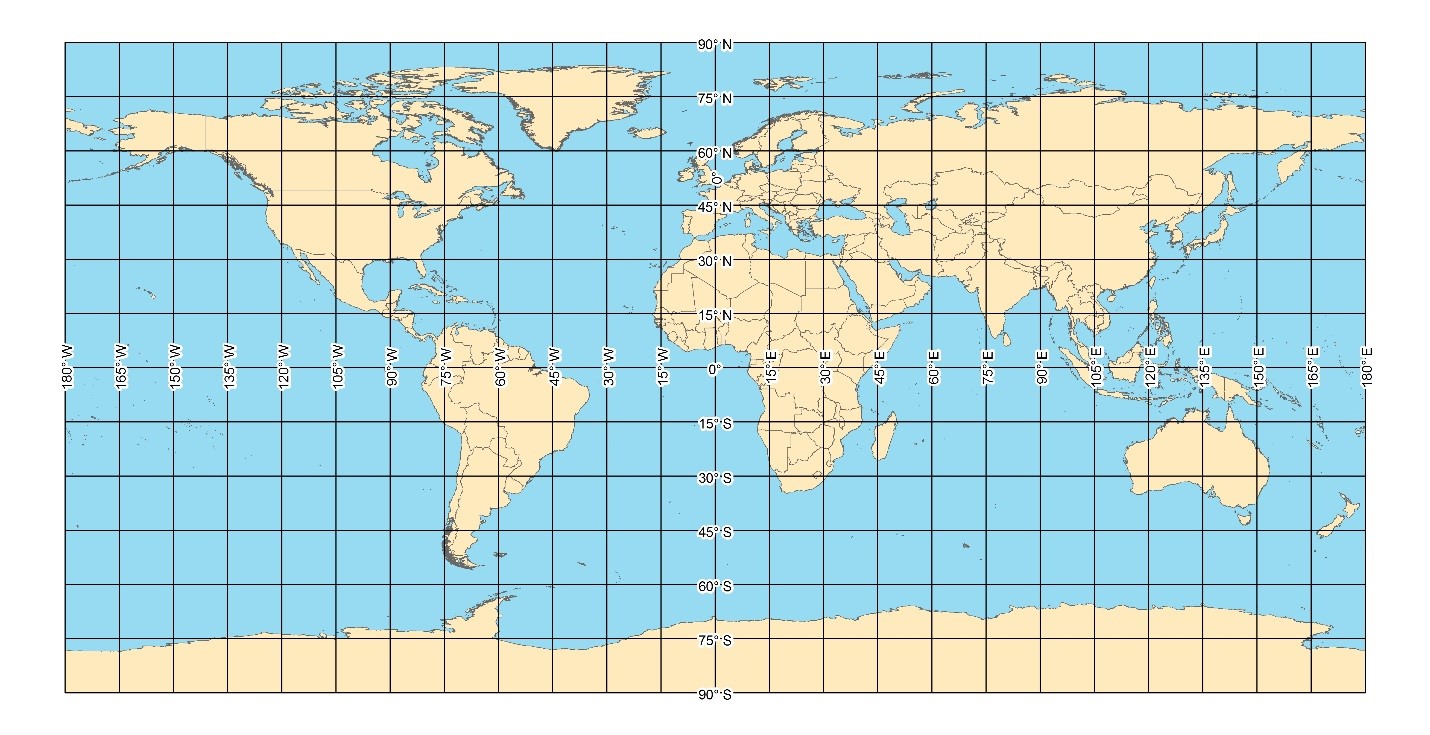 The World Geographic Reference System (GEOREF) is an area reference system used for interservice reporting for air defense and strategic air operations. It provides a method of expressing position in a form suitable for reporting and plotting and may be applied to any map or chart graduated in latitude and longitude. Click here for a detailed description of the GEOREF system.

The USNG is a coordinate reference system used for locating points and areas on the surface of the Earth and is functionally equivalent to the Military Grid Reference System (MGRS). The main difference between the two systems is in the method for specifying the datum. In MGRS, an alternate lettering scheme (Old Letters) is used for the 100,000-meter Square Identifier when the position is referenced to an older datum. The USNG does not use the alternate lettering scheme, but simply specifies the datum after the position reference. For example, a position on the NAD27 datum is reported in the two systems as follows:

The NGA Office of Geomatics maintains the following specialty grids:

Geodetic ResearchGeodetic Research is the attempt to discover missing geodetic metadata in regards to coordinate data or maps to give them added spatial context. In most cases, if there is missing geodetic metadata, geodetic research is the process by which geodetic scientists use tools such as GIS, geographic translators, calculations, library of geodetic information and open source to learn likely geodetic reference ellipsoids/datums, grid/map projection parameters, a means by which to convert/translate the information to an NGA geodetic standard and a way to properly display the information and verify its location.

While GEOTRANS is the NGA recommended and supported software package for Datum Transformations and Coordinate Conversions, there are occasions when something else is requested or proposed, and needs to be tested. For such occasions, software developers are invited to download the following ZIP collection of test files. These are files created by NGA geodesists working independently of GEOTRANS. The files are simulated data (not measurements) and provide a higher accuracy standard for software performance than does GEOTRANS as of 3/25/2009 for the algorithms treated. Also, in some cases, they allow input values that GEOTRANS does not. Therefore, if developers have not carefully defined the domain of valid inputs and implemented the corresponding input checking, these tests are likely to reveal the lack thereof. The files "Instructions.doc" and "Release_Notes.doc", found in the ZIP, contain further information. This is an ongoing project, and more tests will be added in later releases. Comments are welcome at the e-mail address below.

A geodetic package is a collection of geodetic metadata used for grid, graticule and magnetic verification for all NGA standard map products. The software to create a geodetic package is GEOPAK and is available at the NGA GEOINT APP Store. PKI certs required.

Services require PKI certs and allow visualization via the IC Portal or ArcGIS desktop (download). After selecting the link below, additional viewing options may be available by following the link under the "Map Contents" heading.